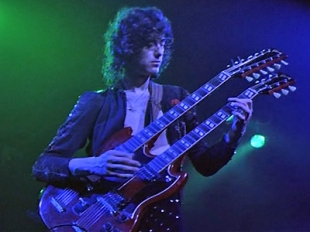 By 1960, Gibson needed a new model. Sales were dipping and the Stratocaster owned the market, so they came up with the SG - a thin, tombstone style flat body with sharp devil horn cutaways. If the Strat was sexy and voluptuous, the SG was sharp and sinful. The SG was also shallower and lighter than the Les Paul, which felt as weighty as a tree and just as immovable. It also afforded much easier access to higher frets. Â

While all that made the SG became a legend in its own right, the reason why any hard rock connoisseur would want to upgrade to the double neck variant (the EDS-1275) was simple - Jimmy Page. The Led Zeppelin legend made the EDS-1275 a concert staple and a absolute necessity.

It's 6-string lower half allowed Page to pluck out those opening notes of 'Stairway to Heaven' before jumping onto the 12-string for the crunching bridge section, followed by a return to the 6-string for the triumphant solo. This made it both incredibly versatile giving the guitarist the choice of crisply clean solos and chunky chord progressions, without the need to switch guitars mid-song. It also ticked all the boxes of rock excess.