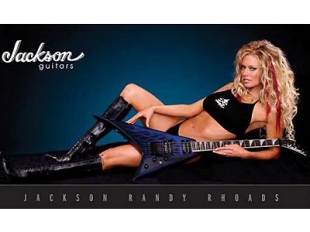 The Gibson Flying V represented a guitar era going modernist. While Gibson's initial version of the future didn't catch on to the masses upon its introduction in the late 50s, by the 80s the Flying V was becoming very well known with hard rock and metal. It was edgy, jagged, muscular, manly, sharp and unforgiving - few guitars have made such a bold statement.

Originally it became popular with blues musicians such as Lonnie Mack and Albert King. When Jimi Hendrix was spotted with one, they enjoyed a resurgence of interest. But for once it wasn't Gibson who really brought home the baconÂ…

The Jackson guitar company found fame and fortune with their edgy incarnations, specifically the Jackson Randy Rhoads which was commissioned by Rhoades, the Ozzy Osbourne guitarist himself. While Rhoads died in a plane crash in 1982, the guitar that was created in the same year went on to become the definitive heavy metal axe - it helped define Metallica, Machine Head, Iron Maiden, Anthrax and countless others.