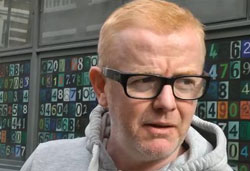 Radio DJ Chris Evans was banned from a prestigious celebrity golf tournament a couple of ...

Radio DJ Chris Evans was banned from a prestigious celebrity golf tournament a couple of months before he was due to defend his title. The tournament, which usually includes A-listers such as Hugh Grant, Michael Douglas, and Samuel L. Jackson, sees teams consisting of one professional and one celebrity playing rounds. Chris Evans won last year’s tournament with his professional partner Nick Dougherty, but the radio DJ will not be allowed to participate this year – or ever.

The golf bosses came to the decision after other players complained about the team’s 40-under par performance over four rounds last year, in which Evans won the Alfred Dunhill Links Championship by giving himself a generous handicap. Although organisers did not clearly state the reason behind the ban, talks are that the handicap had something to do with it.

Last October, Evans’ handicap was 10, which means he can take 10 shots off his actual score to arrive at a ‘net score’ that then counts toward the final result. He claimed after their victory that he felt the organisers deemed the handicap too high for his abilities. Audiences seemed to agree too, with some suggesting that he should not have been allowed so many shots.

The decision to ban Evans, unfortunately, came just three months before this year’s tournament. “Sadly, I will not be defending my title this year. It transpires I’ve been barred for life,” the DJ said.