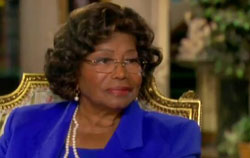 Michael Jackson’s mum Katherine, 82, was recently reported missing, but Los Angeles cops now confirm that she has been found and is alive and well. Katherine, who is the legal guardian of Michael’s three kids, was simply ‘on holiday’ in Arizona.

The missing person report was filed at the LA County Sheriff’s office over the weekend by her nephew Trent after Katherine went missing for a week. After the filing, fears for Katherine’s well-being surfaced.

Paris, Michael’s daughter, also tweeted: “My grandmother is missing. I haven’t spoken to her in a week. I want her home now. If anybody sees my grandmother, please call the authorities.”

Prior to being found, however, Katherine’s son Jermaine insisted that his mum was on a holiday, branding Trent’s actions as strangely alarming.

Jermaine is one of Michael’s siblings who recently wrote to the executors of Michael’s estate claiming that the signature on the will was ‘fake, flawed, and fraudulent’. These claims were accompanied by requests for the current executors to step down. According to them, the stress placed on Katherine by the executors caused her to suffer a mini-stroke, hence her much-needed holiday in Arizona with daughter Rebbie.