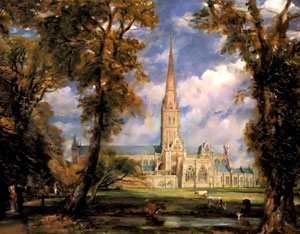 Having being at risk of being sold abroad, the Â£23.1million deal will keep the masterpiece in the UK.

Tate bought John Constable's 1831 masterpiece Salisbury Cathedral from the Meadows for £23.1million. Tate Britain's Director Nicholas Serota said that the painting, which was on loan at The National Gallery for 30 years, is “worth every penny.” Experts say that the masterpiece could have fetched up to £40million if it was put to auction.

The masterpiece was made possible by the partnership of five national and regional galleries. Heritage Lottery Fund is a major funder with £15million.

Jenny Abramsky from the Heritage Lottery Fund said, as reported by the BBC: “It is unimaginable that this particular painting might have ended up anywhere other than in a UK public collection.”

The painting was at risk of going abroad after a major American museum showed interest in buying it.

The six-foot canvass, which Constable painted shortly after the death of his wife, will be shown at Tate Britain until the end of the year before travelling around the UK.