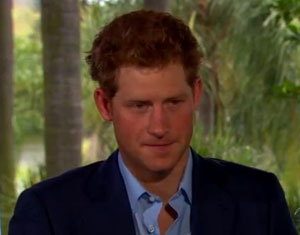 Prince Harry, uncle to the new royal baby, has expressed that he wants to ‘make sure’ Prince George ‘has fun’.

While at a London exhibition, Prince Harry, who met Prince George earlier this week, in answer to a question about what role he’ll have in regards to his nephew’s childhood said: “To make sure he has a good upbringing, and keep him out of harm's way and to make sure he has fun.

“The rest I'll leave to the parents.”

The exhibition relates to the charity Sentebale. The charity, founded by Prince Harry and Prince Seeiso of Lesotho, helps children in Lesotho.

Speculation over what the new royal baby, who was born on Monday 22nd July at 16.24 BST, would be named ended earlier this week, with the announcement that the Duke and Duchess of Cambridge have named their first-born George Alexander Louis.

Prince Harry is fourth in line to the throne.

The Duke and Duchess of Cambridge and Prince George of Cambridge left St. Mary’s Hospital, in London, on Tuesday, 23rd July. They stayed at Kensington Palace on Tuesday night.

Following this, it is believed they have been staying at the Duchess of Cambridge’s parents’ house in Bucklebury, in Berkshire. This relates to the house of Michael Middleton and Carole Middleton.

timetalk Factfile - Find out more about the young Royal Family

Kate Middleton Pregnancy: A Boy or A Girl?

What will be the Royal baby’s name?

Camilla hopes royal baby here ‘by the end of week’

Kate Middleton in hospital in labour

Kate and Wills’ baby is born!