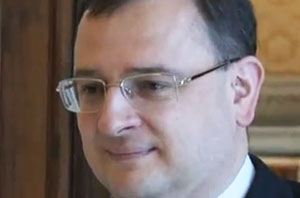 The Czech Republic Prime Minister has said he will resign

The Prime Minister of Czech Republic Petr Necas has stated that he will resign. This came on Sunday, 16th June.

When making the announcement, Mr. Necas said he was aware of his “political responsibility”.

He added, as reported by the BBC: “I will tender my resignation as prime minister tomorrow." he said. "The entire government will therefore resign with me.”

It has been reported that Jana Nagyova, Mr. Necas’ Chief of Staff, was charged with corruption and abuse of power before the weekend. Also, that four other individuals have also been held.

It is expected that a new power will be come together until the elections next year.

Mr. Necas, of the Civic Democratic Party, was appointed his post in office in the summer of 2010.

Czech Republic is located in Europe, with Austria, Germany, Poland and Slovakia surrounding it.