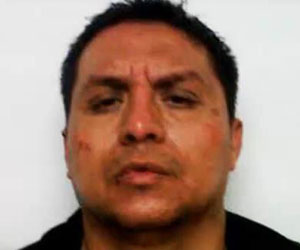 Miguel Angel Trevino Morales has been captured in a raid

The leader of the Zetas drug cartel Miguel Angel Trevino Morales has been captured in Mexico. The 40-year-old was captured on Monday, 15th July, Eduardo Sanchez, a government spokesman, has said.

He confirmed Miguel Angel Trevino Morales, who is known as ‘Z-40’, and who is known for being brutal, was captured close to the US border.

It is understood that Mexico’s marines captured the notorious leader, and that this happened during a raid.

Mr. Sanchez said: “Three people in the truck were detained by ground troops, who had arrived to support the naval forces, who had carried out the detention via the helicopter. Not a single shot was fired.”

It is also understood that Miguel Angel Trevino Morales had $2million as well as eight guns.

The man was sought by both Mexico and the US.

He is considered to be to blame for operating drugs on a large scale as well as instructing massacres.

Miguel Angel Trevino Morales was indicted on drug trafficking and weapons charges in 2009 and 2010 in the US. The US government said there was a $5million reward available for details leading to his arrest.

He headed the Zetas drug cartel in 2012. The Zetas started off as being linked to the Gulf cartel but then separated from them.