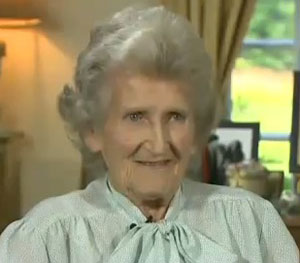 Margaret Rhodes is â€˜not terriblyâ€™ excited about the royal birth, as 'everybody has babies'

The Queen’s cousin Margaret Rhodes has commented on the royal birth. While being interviewed by CNN’s Christiane Amanpour, Mrs. Rhodes said she was ‘not terribly’ excited about the birth of Kate and Wills’ baby as ‘everybody has babies’.

Ms. Amanpour said that surely Mrs. Rhodes was excited in regards to the royal birth, and the answer was; “Not terribly,” by Mrs. Rhodes.

“Well, you know, everybody has babies,” Mrs. Rhodes said. “And it's lovely, but I don't get wildly excited about it.”

Ms. Amanpour then went on to say that the Duke and Duchess’ first-born would at some point inherit the throne and that the birth of the royal baby would be sealed in history.

Mrs. Rhodes, who is 88 years old, also talked about the film The King’s Speech, which is about George VI, saying that she cried when she watched it.

She stated: “It was so well done. And I think it did show the difficulties he surmounted. There was one moment where he was making the king say a whole lot of frightfully rude words....in this sort of barrage.

“And I did say something to the Queen about that, and she said she'd never heard her father use bad language at all.

“So whether that was true or not, I don't know.”

The royal baby is thought to be due mid-July. The gender of Kate and Wills’ baby, who will be third in line to the throne, is unknown.