Oklahoma: In the wake of the tornado 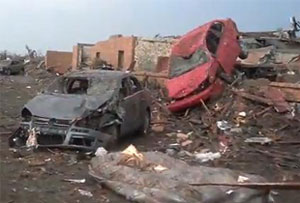 Reportedly, the search mission to find any survivors is nearing its end

Following the huge tornado that hit Oklahoma on Monday, 22ndMay, search and rescue teams have been looking for any survivors in the rubble in Moore, US. According to reports, this is now becoming a recovery process.

Differing from initial reports, the death toll is that 24 people were tragically killed by the tornado, as stated in one report by the BBC.

It has been reported that a certain number of children have also tragically lost their lives.

As well as houses being destroyed, schools were also hit by the twister. In particular, Plaza Towers elementary school was one school that felt the impact of the devastating tornado.

The National Weather Service has reportedly said that the path of the tornado stretched for over 16miles, and that it was over 1mile wide.

It is understood that winds were as strong as 200mph if not more as the tornado hit Moore.

The town of Shawnee was also one place in America hit badly by the band of storm activity in the US in the last week.

In 1999 Moore City was struck by a devastating tornado.