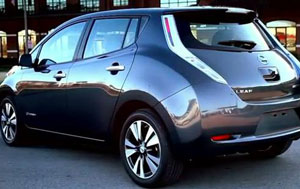 Leaf, the first electric car to be made in UK, gives green-minded motorists another choice.

Nissan’s Leaf, the first electric car to be made in the UK, is now available in the country. This gives Britons another choice if they’re considering getting environment-friendly cars. Leaf is cheaper than the old model and has shorter charging time but longer driving range.

Nissan is hopeful that Leaf will post a serious competition against car companies such as Toyota, which already carved out niches making hybrid vehicles.

David Cameron praised the Leaf saying: "The best possible rebuke to those who say we in Britain don't design things any more, we don't make things anymore.”

Based on recent surveys, motorist who are fed up with high prices of petrol are considering alternative-fuel car. 25per cent of them said that they are considering getting green car in the next five years however, most prefer hybrid to all-electric.

Although a lot of motorists are excited about these new cars, some are still skeptical. Luca Lytton, research manager at the RAC Foundation, said that although electric vehicles are good, there are serious issues that need to be overcome. These include the high cost of the car, uncertainty about the longevity of the batteries, and anxiety about whether the cars can go the distance.