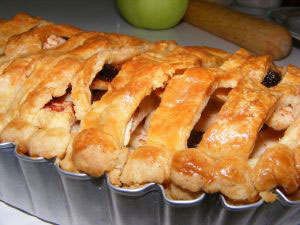 The National Trust has pledged its support for the call to save the great British pud...

The National Trust has announced that it will back a Government Minister’s call to save the traditional British pudding.

Environment Secretary Owen Paterson has urged people to choose traditional British pudding over imported ones. Mr. Paterson, who has been appointed in his position following a recent cabinet reshuffle, has said according to some reports there is a problem with deserts in the UK.

Speaking to Farmers Weekly Mr. Paterson said: “We have a huge opportunity to replace imported desserts with desserts made here.”

He then encouraged diners to choose desserts that are made using traditional British recipes such as apple crumble, spotted dick, and treacle tart, as opposed to crème brulee or panna cotta, which use imported ingredients.

The National Trust announced its support for Mr. Paterson’s call in time for its autumn pudding campaign, during which they would give out free puddings throughout the whole month of October every time a lunchtime meal is purchased in some of its cafes and restaurants.

The special offer for the month will be the traditional British puddings made from seasonal ingredients. Through this campaign, it is believed the National Trust wants to remind its visitors how good the old-fashioned British pud can be.

Clive Goudercourt, the Development Chef for the National Trust, said: “We pride ourselves on baking our own food using the best of British ingredients, many grown on National Trust estates and farms.”

“We hope our delicious, home-cooked puddings will inspire people to choose traditional recipes and celebrate Britain’s best food across the seasons.”

The National Trust is responsible for over 250,000 hectares of countryside and 710 miles of coastline all over England, Wales, and Northern Ireland.