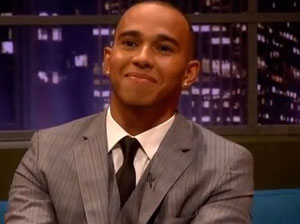 The win (his first in Monza) places him second in the world championship behind only Fernando Alonso with a margin of 37 points between them.

The incident-packed Grand Prix didn't distract 27-year-old Hamilton who displayed his trademark balance of speed and precision behind the wheel.

Despite his victory, Hamilton appeared sullen and distracted at the podium and during the post-event interviews signalling that there could be problems brewing at McLaren, especially given that exec chairman Ron Dennis refused to don the victory shirt or partake in the team photo.

Hamilton spoke to the press afterward, stating: "It’s a fantastic win in front of the best crowd. I’m happy for the team. It’s been the best day.”

Hamilton told BBC Sport: "This championship has been so unpredictable. I'm so grateful we're in the fight, we have a good car and we can compete.

"The car's not necessarily the fastest, but we're as fast as our rivals."

Sebastian Vettel and Mark Webber of Red Bull as well as McLaren's own Jenson Button failed to score.

Hamilton continued talking to the BBC: "It just shows that anything can happen. I've had some real bad races and some good ones - and I hope some more good ones are coming.

"We've had some great performances in the last few races but I've not picked up points in all of them so I need to improve on that area.

"It's going to be incredibly tough. Fernando let the cat out of the bag and said they've got lots of updates coming to the next race [in Singapore].

"I'm going to go back to the factory and hope that the guys are doing the same - I trust they will be. There are seven more races to go so this is just one step."