Hitch a ride to Mars 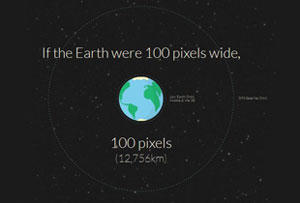 We are a generation who need to measure and label everything. We measure height, weight, size, speed, and distance, among others. But can we put a number to long distances, such as the distance to Mars? And if some rocket scientists come up with the numbers, will we non-rocket scientists be able to grasp its significance?

Fortunately, graphic designers Jesse Williams and David Paliwoda understand our dilemma and tried to make it more understandable for the laymen by assigning a certain number of pixels to kilometres (100 pixels = 12756 km). In case you are wondering, in digital imaging, a pixel is the smallest unit of measurement in a display device such as computer monitors and television sets.

Jesse Williams and David Paliwoda start with using as a scale a 100 pixel-wide image of Earth. The arrow directs you to scroll down untill your reach the Moon which is, by following their measurement, 27 pixels wide and 3,000 pixels (382,680 km) from the Earth. Next stop after a blank, vast space of nothingness is… you guessed it – Mars!