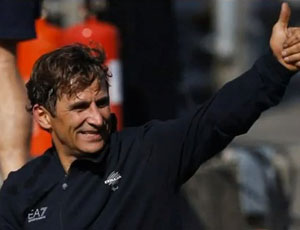 The ex-Formula 1 driver Alex Zanardi came in first place for the H4 hand-cycling time trial, over a decade after his near-fatal accident.

The 45-year-old Italian, who lost both of his legs due to a crash in Germany in 2001, beat silver medallist Nobert Mosandl, from Germany, by almost 30seconds.

The event took place at the Brands Hatch circuit with uphill sections that are thought to favour double amputees such as Zanardi, who on average was reaching speeds of up to 38kph.

"This is a great accomplishment, one of the greatest of my life,” he told the BBC. "I worked very hard to get here. It was great to live such an experience at 45.”

The athlete, who took up hand-cycling around five years ago, stopped motor racing three years ago “against all odds” but has not regretted his wild decision.

“You should not chase pipedreams but, if you have a horizon to look into, happiness is just around the corner,” Zanardi said, as reported by the BBC.

The race at Lausitzring saw Zanardi smash with his competitor’s F1 car at 200mph, but since then the Italian, who helps designs his legs and bikes like he did with the cars, has competed in many competitions.

2008 saw the star come in third position, using a specially crafted car for the Italian-Spanish team, at the World Touring Car Championship.

Zanardi is somewhat of a TV star in Italy, as he also hosts his own show.