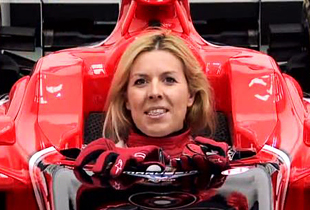 The incident occurred during testing at Duxford airfield. The female racing driver reportedly smashed into a lorry ramp on her way to the pits. It was the same lorry that brought the car to the strip.

The Marussia-Cosworth team had earlier this morning tweeted that Maria was due to begin a test-drive at the airfield.

They wrote: "@mariavillota had her final seat-fitting & pedal test at our Banbury HQ & then headed north to the Imperial War Museum, ready to do battle."

The track is close to the Imperial War Museum in Cambridgeshire.

A BBC Cambridgeshire presenter was on the scene and witnessed the crash. Describing it later, Chris Mann said that the car had successfully completed a circuit when it "suddenly accelerated" into the back of the lorry.

He said: "The car suddenly accelerated into the big truck and there was a sort of board down, like a loading board, and the car went careering into the side of that, probably only 20-30 mph at that point.

"It had been doing obviously 200mph when it was going down the straight in Duxford… some more fire brigade vehicles coming past now. They called, I understand, for an air ambulance to come in, but there is obviously the site ambulance here at the moment."

As yet there has been no official elaboration from the race team or the driver's rep.

However, a brief statement from Marussia confirmed that de Villota has been taken to hospital: "Once her medical condition has been assessed a further statement will be issued."