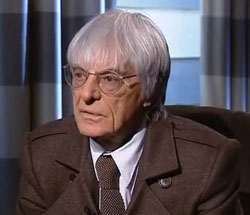 F1 billionaire Bernie Ecclestone has secretly married a 35-year-old Brazilian beauty at his ski chalet in Switzerland. The ceremony saw Bernie, 81, marry Fabiana Flosi, a marketing director 46 years younger than the F1 tycoon. The ceremony was held at Le Lion, Bernie’s £23 million ski chalet in the exclusive resort of Gstaad.

Bernie’s daughters were noticeably absent at the ceremony. Reports say Tamara, 28, and Petra, 24, remained in Los Angeles with their mum. Tamara had earlier told The Mail that she had no plans to attend the wedding out of loyalty to her mum.

The wedding did not come as a surprise as couple’s engagement was already announced back in April when Miss Flosi began sporting a £100,000 ring. There was, however, not much publicity – or enthusiasm – about the event.

Mr. Ecclestone and Miss Flosi have been together for three years after meeting in 2009, just after Bernie’s marriage to second wife Slavica ended. The billionaire met his younger wife when Miss Flosi began working as F1’s vice president of marketing. It was Bernie’s third wedding ceremony and Miss Flosi’s first.

Gstaad, Tamara’s chosen wedding venue before she split from her boyfriend last month, is a chalet set in manicured grounds. It has been the Ecclestones property for over 15 years and is one of the most prestigious properties in the area. It boasts of a stunning view of the Bernese Oberland.