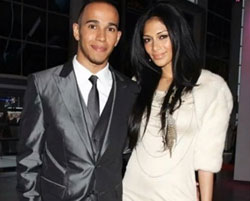 Grieving Nicole Scherzinger left London on Monday for her gran’s funeral in America. With her was her lover and F1 star, Lewis Hamilton.

The X Factor judge was informed about the death of her beloved relative before last Saturday’s ITV1 show. But as they say, the show must go on, and the singer stayed in London to support her acts.

Scherzinger tried to put on a brave face during the show, where she had even danced during Rylan’s performance. However, she wasn’t able to control her emotions when District 3 sang “Tears in Heaven”.

On Monday, she was photographed wearing dark sunglasses as she jetted off from London. Hamilton, who was accompanying her, has reportedly said that he’ll be by her side for as long as she needs.